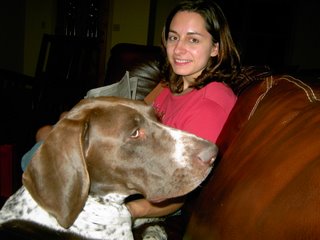 -Julie
Posted by Kevin, Julie, Laz, Moses, and Magellan at 1:50 PM No comments: 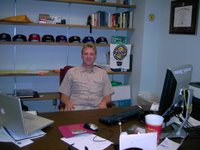 Since I took a lot of time off last week putting in the yard, I am catching up with work that was put on the back burner. I am preparing for a conference in Oklahoma next month, and today I am working on a research enhancement proposal to fund my research on community engagement and the role of housing landscapes on sense of place. It will be nice to get back into researching urbanization issues instead of methamphetamine abuse in North Dakota. Anyway, here is a recent photo Julie took of my in my office at Texas State. The office is not as nice as Ireland Hall, but it is fine for me. The boys are thoroughly enjoying having the Sarah and Gary as houseguests as they search for housing in the San Antonio area.

Inside the UPS truck

I got to go into the UPS truck yesterday. This is something that I have wanted to do for a very long time as I am brown and all. I think some packages have been arriving for Dad's birthday-- I hope I get some cake and get to open presents. There are no pictures of me in the UPS truck, but feel free to send me stuff via UPS so I can continue to make friends and sniff packages!

Laz
Posted by Kevin, Julie, Laz, Moses, and Magellan at 1:10 PM No comments: 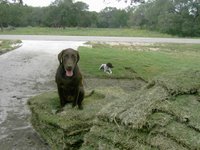 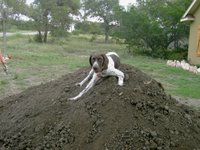 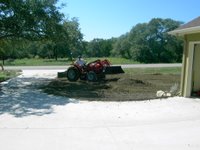 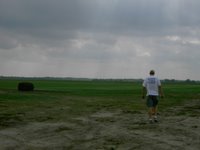 The pack has taken on a big adventure in putting in the front yard. We started with a load of dirt delivered to us from Stone Brooks Ranch - BOOOOoooooo It was delivered late and had clay in it. I guess this passes for top soil in Texas. It sure dosn't look like that jet black soil in North Dakota. Anyway, we had two large piles in the front yard. The man who delivered the dirt was very nice though. We began to spread the dirt (with Moses' help), when we were about half done, we heard on the news that we were going to get 6 inches of rain. This of course would wash all our dirt away! We covered what we could with tarps and hoped and prayed it would miss us. Luckily, we only got around .4in and were spared the deluge. We began to spread again. The nicest man, who we met one time before when he came to the house to introduce himself, drove by and stopped to survey our progress. He mentioned that he had a tractor and could spread this out for us. About 30 minutes later, the dirt was spread and we were so thankful for C.C. We had spread dirt for two days and he saved us at least 2 days of work.

Next, we needed the grass. We ordered grass from the King Ranch near Gonzolas Texas. They don't deliver grass, so we had to pick it up. We rented a trailer and made 4 trips to Gonzolas for grass. It is a 2.5 hour round trip. This took another 2 days.

Finally, we got all the grass layed. Kevin did a great job of fitting it all together. Lazarus was the official supervisor of the trailer and grass laying. Moses was the official tester of the sod. He would lay down on the grass after we layed it down. It was a ton of hard work, but the whole pack is pleased with it. We kept one little hill in the center and named it C.C. hill.

Julie
Posted by Kevin, Julie, Laz, Moses, and Magellan at 3:23 PM No comments: 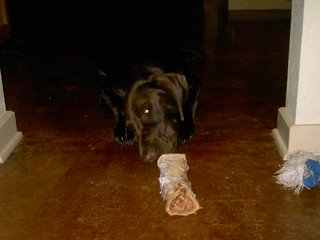 This weekend there was a lot of football on TV. Mom and Dad were wearing a lot of maroon and gold. They had their USC music on Saturday, and then they watched the Redskins lose to the Cowboys last night. Fortunately, my friend June brought over some bones for me and Moses to chew on. Other than a few high fives (more on Saturday night than Sunday) I got to sit on the floor and chew my bone. The best was that we got to play a little football on Sunday. Mom is QB, Dad is WR, I am the Linebacker and Moses gets in the way. It is so fun!

Lazarus
Posted by Kevin, Julie, Laz, Moses, and Magellan at 11:01 AM No comments: 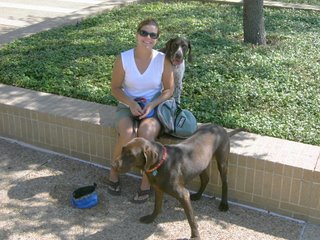 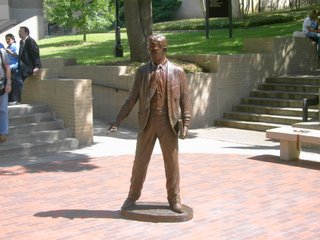 Today we went to Texas State University to see Dad. It was kind of hot, but Mom brought plenty of water for us. We were going to go to some dedication, but the lady in some blue get-up told us dogs were not allowed at the unveiling. Dad told us we could go see the statue sometime in the future. I guess it is some guy who was President and went to this school named LBJ? Anyway, we hung out for a bit then got to go to Sonic for lunch. I shared the popcorn chicken with Dad and barked at the birds in the parking lot. I am feeling better today, and am looking forward to our dirt delivery so we can get our front yard. I think my muddy paws are getting on Mom's nerves.

Moses
Posted by Kevin, Julie, Laz, Moses, and Magellan at 12:07 PM No comments:

A crummy day with doctors

All of us but Lazarus went to the doctor today. Julie and I had to meet our new physician and Moses went to the vet. Julie and I were at the doctors office for 1.5 hours. Fortunately we are healthy, but it took a long time to fill out paperwork and describe our medical history. Moses went in because his ears have been smelling odd and he has two bumps on his back. Laz came along for moral support. The vet told us that Moses had a yeast infection in his ears and his bumps were a reaction to the rattlesnake vaccine. He got some ear drops and the vet said that this is common in dogs that swim a lot. Lazarus is doing great especially now that it is cooling off. All the pack will be on campus tomorrow for the unveiling of a new statue commemorating President Johnson who graduated from Texas State. I am sure more pictures will be forthcoming.
Posted by Kevin, Julie, Laz, Moses, and Magellan at 5:00 PM No comments: 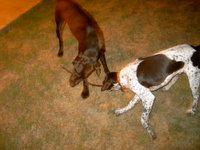 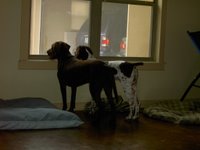 Lazarus and Moses are such good guard dogs. They love to look out the front windows and say a loud hello to EVERYONE and ANYTHING that passes by. What sweethearts. When they can see or hear a deer outside, they go nuts!

It is finally cooling off and Laz and Mos are enjoying playing outside once again! 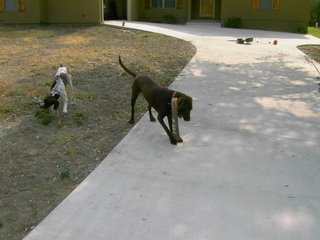 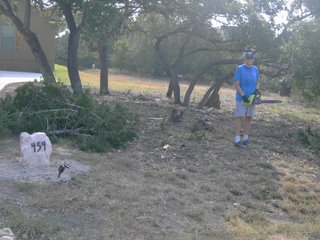 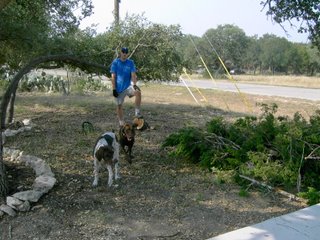 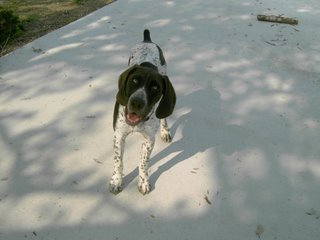 On Labor Day, I helped Dad cut down two Juniper trees in our front yard. It was not as hot as it has been, and I felt pretty good. Dad had a loud knife-like apparatus that he used to slice through the trees and then they fell. It was my job to help clear the brush and move the sticks away from the yard. Moses helped a little too, but he mostly just got in my way and posed for pictures. Mom mostly took pictures, but she did use the knife a bit and helped me clear the brush. We saved the good wood and will use it later this winter to have fires in the backyard like we used to have with Kelly, Kristi, Milo, and Moli in North Dakota. The other good thing from cutting down the trees were that a lot of my friends in the neighborhood waved and saw me working!

Lazarus
Posted by Kevin, Julie, Laz, Moses, and Magellan at 1:10 PM No comments: 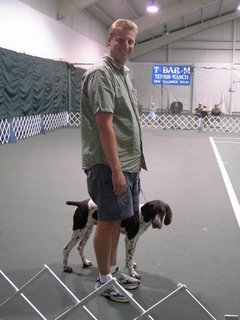 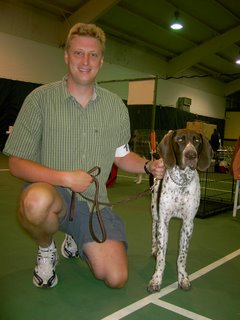 On Sunday, Dad and I did something fun. We participated in the San Antonio Handlers Association Fun Match in New Braunfels. I got to meet a lot of dogs and hung out with Dad a lot. We spent a lot of time waiting around, and a little time prancing around a tennis court? Some lady looked at my teeth, rubbed my back, and touched my hind areas inappropriately. After that, she handed us a brown ribbon that Mom, Dad, and Uncle Phil were happy about. With the ribbon came a bag of biscuits that were almost as good as the Drury Inn's biscuits and gravy. After reflecting on the morning, I believe my finest qualities were my wonderful walking and standing skills along with my beautiful and active nub (docked tail).
Laz came along for moral support, but left midway through because of his aversion to amplified voices. (I think he was a bit offended that he couldn't participate because he is altered.) He'd rather be swimming or lounging anyway.

Moses
Posted by Kevin, Julie, Laz, Moses, and Magellan at 9:48 AM No comments:

Kevin, Julie, Laz, Moses, and Magellan
We are the Romig pack from Texas. Kevin and Julie have been married for 12 years. Lazarus is a 8 year old Chocolate Labrador Retriever who loves to swim in the local rivers. Moses is a 7 year old German Shorthaired Pointer who likes to snuggle. Magellan is a 5 year old German Wirehaired Pointer who we rescued. He likes chasing deer and being goofy.